It’s almost ten o’clock on the 25th of May 2018 and Katri Hurvi, Suvi Toivanen and Tiia Koponen are walking to the Office of OAJ Kuopio. Today they would have their Spanish exam but they have already done it during the period. On the exam days students often take their exams or they can work with group projects or have something unusual like visitors.The girls are talking cheerfully.

Koponen says that she feels as if it already was summer holiday. All the girls are enjoying this day without the exam and stress. The atmosphere is light-hearted and pleasant.

Sonja Lampinen, a Spanish and English teacher in Klassikka, thought earlier that her students would react like the girls did. 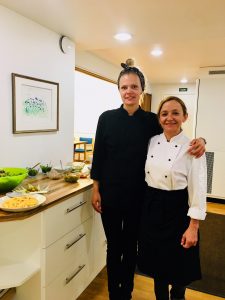 – I felt that my students were happy when they heard that they would have some Spanish food instead of the exam, Lampinen says.

– I guess it was a welcome surprise for them.

The joyful chatter stops when Angela, the Spanish head chef of the day, starts teaching. She cooks a Spanish omelette, called tortilla, in front of curious eyes and and explains what she is doing in Spanish.

After asking Angela and the other chef, Emmi, some questions, it’s time to start eating. First there is a typical Spanish tapas, cold tomato soup with eggs. It’s in a glass and looks like a smoothie. We heard that here is also bread in this tomato soup which makes it thick.

– I tasted this in Spain. Then there were eggs and also ham on top of the soup, Toivanen tells the other girls.

Soon it’s time to eat more: there are salads and vegetables, chorizo, more omelettes, olives, cheese and, of course, bread. Eating a little bit of everything makes the students feel full easily. 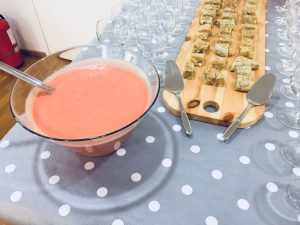 Lampinen thinks that these foods were a good choice for our tapas course.

– We got an abundant table full of Spanish food with cold dishes. We really had plenty to eat.

– The food tastes delicious. I think that these dishes are different than Finnish dishes, Hurvi says, after tasting this and that.

– Yes, these dishes are different, but I can recommend them to everyone.

Toivanen believes that she could cook these foods herself later. 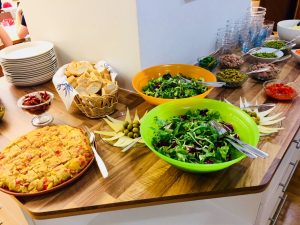 – I have already made the omelette at home, she says.

The other girls also think that they could make these dishes, especially the omelette, later.

Lampinen feels that this day was a good day.

– I think that this worked out well. It didn’t take too much time.

– And it’s wonderful that the students help a lot by cleaning their dishes, she says and watches them picking up dishes and gives thanks to students.

She believes that she could do this again with her other groups.

– I hope that this is a positive thing that could maybe motivate in studying Spanish in the future, she says. Lampinen hopes that these kinds of events would delight her students. 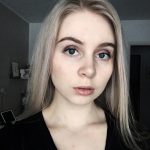